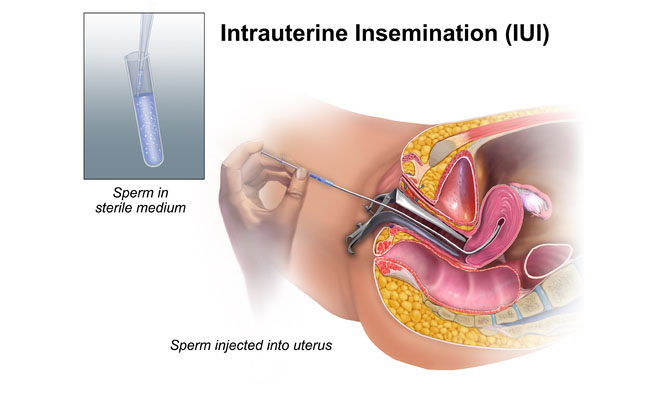 IUI is the direct placement of processed, highly motile, concentrated sperm, washed free of seminal plasma & other cells, into the uterus, adjacent to the medical ends of the fallopian tubes, as close to the ovulated oocytes as possible. This procedure greatly reduces the distance that the sperm must travel and increases the amount of spermatozoa available to the oocytes. The number of sperm that reach the fallopian tubes is increased as much as 25% with IUI. A simple and non invasive technique which can be performed without expensive infrastructure with a reasonable cumulative live birth rate within 3 or 4 cycles. Artificial insemination is done by intracervical, intraperitoneal, intrauterine and transcervical/ intra fallopian. Out of these most commonly used is intrauterine insemination.

IN THE MALE PARTNER

6. High and prolonged viscosity, which results in firm coagulum inhibiting transport of active sperm near the oocyte.

The main indications for donor insemination are gross male subfertility (azoospermia or severe oligoasthenoteratozoospermia), familial or genetic disease such as Huntington’s disease, hemophilia and also severe Rhesus isoimmunization. The use of cryopreserved semen in donor insemination programmers is now mandatory in most countries including India to minimize the possibility of transmission of the viral diseases to the recipients.

IN THE FEMALE PARTNER

1. Anatomic defects of the reproductive tract where direct coitus is not possible

5. Destruction of endocervical glands as a result of conization, laser surgery or cryosurgery

7. Unexplained infertility where pregnancy is not achieved with other medical intervention

9. Antisperm antibodies in the cervix

Women with altered tubal function or with bilaterally blocked fallopian tubes (both) should not be taken for IUI treatment.

There are fortunately very few and rarely severe.

Severe ovarian hyperstimulation syndrome (1%) Multiple gestation Ectopic gestation There are very few complications reported related to the procedure of IUI itself. The estimated risk of infection is 1.8 per 100 women. Occasionally spotting or bleeding may occur, especially if a tenaculum or allis forceps had been used to hold the cervix, or ifthere was difficulty accessing the uterine cavity. In stimulated cycles, the main risks that worry the clinician are the ovarian hyper stimulation syndrome (OHSS) and multiple pregnancies.

The results of IUI in terms of pregnancy rates per treatment cycle vary considerably between clinics and evaluation of the results is difficult because of the heterogeneity of the patient population and the different ovarian stimulation protocols used in the studies. Usually pregnancy occurs in the first four to six attempts and thereafter the PR is hardly increased by continuing for longer. Careful selection of patients is important.

Those who will benefit most are young women with patent fallopian tubes, with no ovulatory disorder, no endometriosis of moderate or severe degree and of male factor infertility in their partner. The generally accepted fecundity of normal couples approaches 15% to 20 %, but the cycle fecundity of couples who do not conceive in 12 months without contraception, is as low as 1% to 2%, IUIl with or without controlled ovarian hyper-stimulation is thus often used in most couples with subfertilty or relative infertility, in the absence of mechanical obstruction within the genital tract. Enhanced cycle fecundity has been demonstrated with homologous IUI in various studies varying from 9% to 23% and may be higher in individual cases.

With a women having Functional Patent Tubes & male partner having Adequate Sperm Count”, Intra Uterine Insemination is ‘Reliable & cost effective option’. In such couples IUI may maximize fertility with minimum patient risk and less expense. The average pregnancy rate of IUI is 10 %, but depending on the indications and patient characterization, it can be much more. Addition of super ovulation, especially controlled ovarian hyper stimulation is preferable to natural cycle treatment, both for improving success rates, and for ease of regulation and planning of treatment. The prepared semen sample should have certain minimal characteristics, which can prognosticate the outcome. The majority of pregnancies occur in the 3-4 cycles. After a trial of 4-6 cycles, the patient should be counseled appropriately to move on to more advanced forms of assisted reproduction (IVF or ICSI).