Laparoscopic Surgery - What is it? 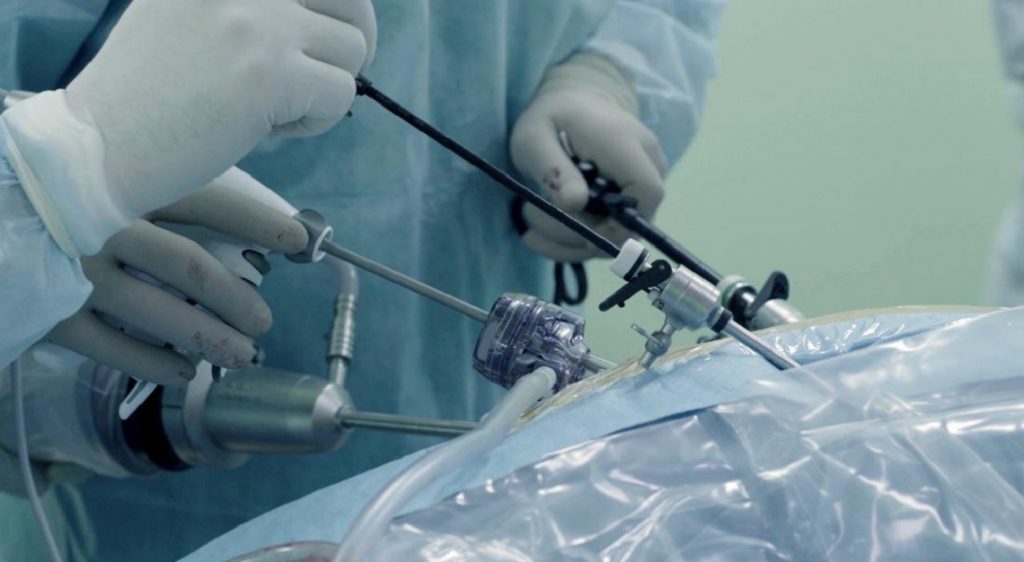 Laparoscopy means to look inside the abdomen. This is a method of performing surgery by giving 2 to 4 small cuts (0.5 to 1.5 cm) on the belly. Through these cuts different instruments including a telescope is inserted. This telescope is connected to a camera, which in turn transmits the image to a monitor or a TV screen. The surgeon performs the operation by looking at the TV / monitor to see his/ her hands, instruments as well as organs inside the body. This surgery is more difficult than the routine surgery where the patients belly or the abdomen is cut open. The reason is two fold. One is that in laparoscopy the surgeon cannot feel any structures and has to rely only on the visual sensation. Secondly the TV or monitor offers only a 2 dimensional picture whereas the actual surgery is a 3 dimensional process. Therefore laparoscopic surgery not only requires a higher degree of skill but its success is also dependent on the degree of sophistication of camera instruments etc.

Today laparoscopic surgery is fast becoming the routine way of doing all small and big procedures. This method does not involve opening up the entire belly; so the chances of pain, hernia and infection are less. As the patient is able to walk around within hours the need to stay for long time in the hospital is also reduced.

Earlier there was a lot of myth and misconception regarding this surgery most importantly its failure and complications. But as the technology is advancing and more and more surgeons are doing this surgery, these fears are becoming unnecessary. Toady in good and experienced hands the complication rates of laparoscopy are similar to open surgery.

In infertile patient laparoscopy is used to understand tubes and uterus better. Common reasons when laparoscopy may be advised are

• In infertile patient laparoscopy is used to understand tubes and uterus better. Common reasons when laparoscopy may be advised are

• In infertile patient laparoscopy is used to understand tubes and uterus better. Common reasons when laparoscopy may be advised are

• When USG shows some cyst or mass in tubes or ovaries

• When USG shows some cyst or mass in tubes or ovaries

• To see if tubes are open

• Remove any adhesions around tubes or ovaries

At times laparoscopy is combined with what is called as hysteroscopy. Just as laparoscopy is used to see inside of the abdomen, hysteroscopy means looking inside the uterus. Again this technique can be used for both identifying problems as well as correcting them.

Depending on the patient and the type of surgery a laparoscopic procedure requires hospital stay ranging from a few hours to 1-2 days.

Laparoscopy is the way to do surgery especially when the woman wants to get pregnant because it does less damage to the tissues when compared to open method.

Today 3 dimensional laparoscopy or 3 D scopy has also come up which gives better visualization so that the surgeon can do a better surgery. Similarly a newer advancement is robotics. These methods give more advantage when dealing with complicated or difficult cases.

At the end of day it is important to remember that the man behind the machine is more important than the machine itself. So first choose your doctor then discuss with him /her about the treatment options and surgical methods. Some doctors may not be comfortable with laparoscopy. If so, then it is better to allow them to operate in a way they like best or change to a doctor who can work along your expectations.

When choosing a hospital for laparoscopic surgery make sure to talk to the operating surgeon about surgery as well as instrumentation Choose laparoscopy for less pain more gain.